The Georgian Era reigned as the supreme style between the years 1714 to around 1837. It makes sense, as the four kings reigning in England during this time period were all named George (I, II, III & IV). So what does this have to do with jewelry? When looking at Estate Jewelry the time frame in which it comes from can make all the difference in the world. Each era has something slightly different and yet amazingly beautiful to offer. I thought for the next couple blogs I would touch on the different Eras in Estate Jewelry to give you a better idea of what you are looking at.

There are so many characteristics that make this era unique. For example, the way in which the jeweler would work the metal. Prior to 1750 the jeweler would use a hammer to the gold.  No matter what the motif was there was always balance in the piece. The balanced or symmetrical aspect of jewelry will carry over into many different eras.  It was after 1750 that the rolling mill was invented and the options for the jewelers became much greater. Moreover the speed to which they could complete a piece of jewelry was faster.

Ribbons and bows, flowers, feather plumes and sprays of foliage were often the designs of choice at this time as well. As you can see in the photograph below the ribbon clearly shows the cannetille technique of bending wire into intricate designs. This particular design is often referred to as filagree but is not limited to that.  Another common technique used at this time was to use very thin pieces of metal or foil on the back of the gemstones to enhance the shimmer they would have in candlelight. They would often set the stones in silver as it would allow for greater brightness. 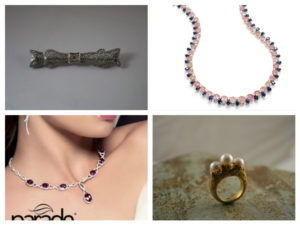 Note the pin in the first picture. This is a great example of the use of symmetry and wire (filagree) work.  The second picture to the right of it is a beautiful example of individually set gemstones in this case sapphires.  The third is a modern day example of the same style of necklace.  This particular piece is rubies and diamonds set beautifully by Parade Design.  Finally the fourth picture is a custom piece by one of our jewelers.  Note the heavy nature of the 24 karat gold.  This is a wonderful example of Baroque style which was very popular during this time.

Roman and Greek designs were often depicted throughout the majority of this time period. The Greek Key or the grape leaves and olives were often crafted into pieces. During the time frame of the Napoleanic wars, pieces depicting pyramids and papyrus leaves were trending. The wars moved from Egypt to Germany. With this, the Germans had great patriotism and many of their elite traded in their gold jewelry for replicas made in iron to help in the war effort.

The second and third picture, as I mentioned above are similar in setting styles these are known as the Riviere style. As you can see this style of individually setting the stones and dangling them from a chain is still in many modern pieces.

Brooches and pins are a great fashion statement.  So, next time you are in take a look at the Estate Case. See if you can pick out the pieces that are styled from this time period. Estate jewelry is a big industry and it is not going anywhere anytime soon.